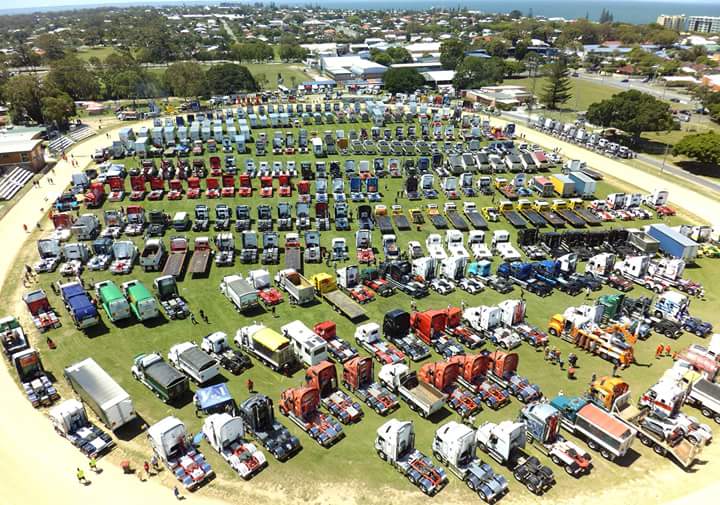 Convoy for Kids began in Brisbane in 1991, when Logan City truck driver, David Gaudron’s 10-year-old nephew with special needs badly wanted to ride in a big truck. David wrote a letter to ‘Truckin Life’ asking for help to organise something – he had no idea what he wanted to do.

And the rest, as they say, is history. A working committee of David Gaudron, Robin Hunter, Kevin Prescott, John Moran and Senior Constable Mark Yabsley was formed to organise the first convoy. At that meeting many years ago Convoy for Kids was born and because of their vision, millions of dollars has been raised for children’s charities.

Following a 10 year hiatus, The Brisbane event was re-ignited following discussions with some of the present committee and National Ambassador John ‘The Ferret’ Moran O.A.M. Brisbane Convoy for Kids returned with a bang in 2010 and the last nine convoys have seen over $350,000 being donated to benefit children in South East Queensland.

This year an expected 600 plus trucks along with 100 utes and bikes, will travel the 65 kilometre distance from Forest Lake on Brisbane’s southside, along the Gateway Motorway to finish on the north side at the Redcliffe Showgrounds for the 2019 Brisbane Convoy for Kids on Saturday the 2nd of November.

Previous events have been warmly received by the community, further encouraging Convoy for Kids to continue fulfilling their goal – to provide commitments to both sponsors and beneficiaries through the yearly convoy with proceeds going to Hummingbird House (Queensland’s first and only hospice for children.)

Come along to the Brisbane Convoy for Kids stand at this year’s Brisbane Truck Show to see the wide range of merchandise, including some new items designed especially for this year’s show. The dedicated band of volunteers will be able to assist you with any questions you may have regarding this year’s event including how to become a sponsor or volunteer. You may even want to register your vehicle for convoy! And kids, don’t forget to have a drive of the convoy truck in the stand and get a free balloon.