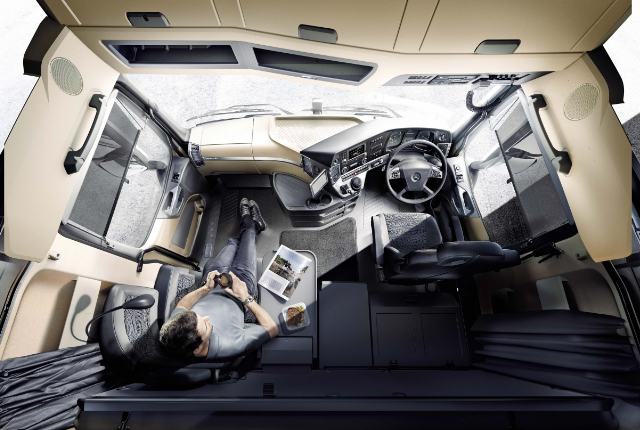 Mercedes-Benz will reveal a spacious new sleeper cab option concept with an innovative interior cab layout for its new generation truck at the Brisbane Truck Show in May.

Customers currently have the option of a fixed 750mm mattress in its large sleeper cab, but Mercedes-Benz is looking at further increasing comfort levels with an even larger mattress and a clever lounge-style passenger seat arrangement.

The new feature is called the SoloStar Concept and could soon be available for Australian Mercedes-Benz trucks. It is currently undergoing evaluation with a range of Australian customers.

The idea of the feature is to maximize the living space of the cab and create two different spaces, one for resting and another for sleeping.

When the bed is folded up against the wall, the driver can enjoy a corner lounge-style seat that rests in the back corner of the cab and opens up a vast amount of legroom.

The lounge-style seat can be used by the driver during rest stops or can be utilised as a traditional passenger seat.

The passenger seat folds forward to allow the large bed, which features a locally-sourced mattress, to fold down.

The maximisation of the existing cab interior means there is no change to the external structure of the cab, which keeps down cost and, most importantly, avoids any weight gain that could hurt productivity. It also retains the integrity of the original cabin, which passes both the ECE-R29 crash test standard and the Swedish cab strength standard.

Mercedes-Benz Australia considered the European SoloStar Concept system, but decided its bed was simply not wide enough and subsequently worked to develop a larger bed that would better suit local requirements.

The Australian version has also been further developed to include a dual fridge set-up, which sits below a fixed table, as well as a row of cabinets mounted high on the back wall for optimum storage.

“The new Generation Mercedes-Benz truck has been remarkably well received in Australia and we know how much drivers love it,” says Mercedes-Benz Truck and Bus Australia Director, Michael May.

“We have received a lot of positive feedback about our current sleeper option and we thought we could expand on this and see what our customers think about the SoloStar Concept option, which delivers a larger bed as well as a cavernous rest option within our existing cab.”

“We think it is a great way to further increase driver comfort out on the road, without adding weight and we want to see whether it ticks all the boxes with our customers.”