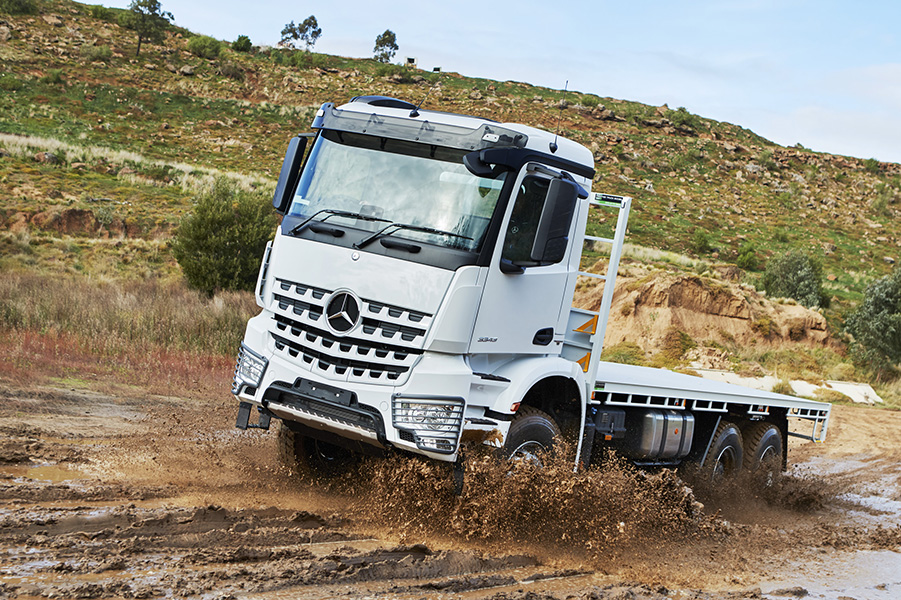 Daimler Trucks in Australia lifted the lid on an entirely new range of all-wheel-drive models while a day earlier, corporate cousin Freightliner announced it will leave absolutely nothing to chance in ensuring the suitability and success of its upcoming Cascadia conventional.

Daimler Trucks will be pulling out all stops over the next few years in an unbridled bid to battle market heavyweights Volvo Group and Paccar for market dominance.

It was a message firmly endorsed by Richard Howard, the head of sales and marketing at Daimler Trucks North America (DTNA), visiting Australia for the preview of the first Cascadia and announcing that around US$100 million will be invested in the model’s righthand-drive development and testing program.

An adamant Richard Howard said it is the biggest product development investment ever made by Freightliner outside North America, and firmly commits DTNA to a bold new future for the Freightliner brand in the Australian and New Zealand markets.

“Our aim is to be number one in every market we contest,” said an upbeat Richard Howard, “and that’s certainly our intention for Australia.”

Freightliner commands the North American heavy-duty truck sector with a phenomenal 40 per cent stake of a market which will deliver at least 280,000 trucks this year. Cascadia, now in its second generation in the US following an investment of almost US$400 million, and arguably the biggest redevelopment and testing program in Freightliner’s history, is unquestionably the muscle behind the brand’s vice-like grip on North American market leadership.

Critically, and in what amounts to a significant change of tack within the Daimler Trucks group, Richard Howard confirmed Australia’s place as one of the five core markets for Freightliner on the international stage.

Consequently, righthand-drive Cascadias will be directly linked to engineering and development programs as they occur in the US. Previously, Australia was akin to a ‘Special Projects’ division which invariably led to long delays when engineering modifications and product updates were required.

Following our exclusive recent photo of Cascadia at the Anglesea Proving Ground in Victoria, the preview of the same lefthand-drive unit in Melbourne marks the official start of an extensive local testing and development program leading up to the model’s launch in early 2020.

According to Freightliner principals, the first test trucks will be lefthand-drive – equipped with camera and monitor technology to safely operate on public roads – before an increasing number of righthand-drive models join the program.

In a press statement, Freightliner adds, the ‘exhaustive multi-million dollar test program for the truck in local conditions (is) to ensure the best possible specification is selected and that it stands up to Australia’s tough roads and conditions.

‘This will be in addition to testing that will be carried out by the research and development team at DTNA in the US.’

Ultimately, the Cascadia range will cover applications from local and regional distribution up to roadtrain triples combinations.

Cascadia will, of course, replace the aged Century Class range of conventionals but it’s not yet clear if it will also lead to the demise of the Coronado model. However, as Freightliner has already announced, Cascadia’s arrival in 2020 will mark the end of the Argosy cab-over.

Well aware of the reasons behind Freightliner’s lacklustre sales performance over many years, and perhaps most excited by Cascadia and the potential it brings to Freightliner’s future is the brand’s Australian director, Stephen Downes.

“We all know Australian trucks run harder, faster and in hotter conditions, so we are conducting a test and development program that is far more comprehensive than anything Freightliner has done in this country,” Downes said a press statement.

“There is good reason Cascadia is the best-selling truck in the United States, but we have to make sure we get it right for Australian conditions,” he asserted.

A success story from the moment it was launched on the Australian market, the new Mercedes-Benz truck range has added another string to the bow with the launch of an impressive line-up of all-wheel-drive models.

The rebirth of the Benz brand in Australia started with the launch in late 2016 of a prime mover family which has surpassed even Mercedes-Benz’s considerable aspirations.

This was followed by the arrival last year of an on-road rigid range which, according to company executives, is now starting to make significant inroads in highly competitive markets.

The off-roaders are the third stage of Mercedes-Benz’s ‘new generation’ range but according to Mercedes-Benz Truck and Bus Australian director Michael May, they certainly aren’t the end of the program.

Without giving any details, May said “a significant development” would be added around the middle of 2019.

Equipped with many of the impressive attributes which have made their prime mover siblings the bullet performers of the past year or so, the all-wheel-drive models come in 4×4, 6×6 and 8×8 configurations ranging from a 300 hp 4×4 unit with a gross vehicle mass (GVM) of 16 tonnes up to a 460 hp 8×8 with a GVM of 41 tonnes.

Target applications include mining, construction, remote maintenance and fertiliser spreading roles as well as units configured for adventure travel with paying passengers aboard.

There are two 4×4 models, each powered by the eight litre OM936 engine.

In the 1630 4×4 model, peak power is 300 hp feeding into an eight-speed Powershift automated transmission and 3.583:1 diff ratio. A five-speed fully automatic Allison shifter is optionally available.

Its bigger brother is the 1835 with a GVM of 18 tonnes and maximum power of 350 hp, again driving through the eight-speed Powershift box but with the deeper 4.833:1 final drive ratio. However, this model is optionally available with a nine-speed manual transmission and two-speed transfer case.

Like their on-road counterparts, the all-wheel-drive models have engines compliant with Euro 6 emissions standards and come with a high performance engine brake. For even greater retardation, a secondary water retarder is optional.

Importantly, all models are also equipped with a specially developed cyclone air pre-filter for operation in extremely dusty environments.

Additionally, explains Mercedes-Benz, a low-speed transfer case is a feature of all models.

The two 4×4 units operate in two-wheel-drive until 4×4 mode is engaged and are equipped with a rear diff lock, whereas the 6×6 and 8×8 models operate in all-wheel-drive at all times and feature diff locks front and rear.

Baby of the bunch, the 1630 model retains the Atego cab rather than the new-look cab of the latest models.

Mercedes-Benz’s statement that the latest off-road range also has ‘a new heavy-duty chassis construction engineered for high torsional flexibility’ was certainly given credence during short test drives of all models at an off-road facility an hour or so from Melbourne. In fact, the level of torsional flex displayed by a cab/chassis 8×8 model was extraordinary.

Meantime, the driver hasn’t been forgotten with the all-wheel-drive models exhibiting the same high levels of comfort and operational convenience as their on-road counterparts.

All up, top marks for a strong, well specified, and entirely capable off-road range incorporating the impressive features of its on-road counterparts.