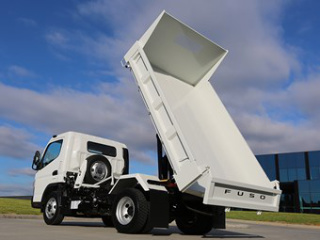 Engineering work has enabled Fuso’s Wide Cab Canter Tipper to carry one tonne more than its previous limit, the company has announced.

A range of engineering upgrades has given the vehicle a gross vehicle mass (GVM) of 7.5 tonnes and a gross combination mass (GCM) of 11 tonnes, as well as a carrying capacity of 2.4 cubic metres – up 14 per cent.

Fuso said earlier this year that the 515 City Cab factory tipper was now equipped to carry an additional half-tonne of payload. Check out the story here

Fuso says this further enhancement is a result of increasing the length of the tipper body by 300mm, for a total internal body length measurement of 3150mm.

A larger hydraulic lift cylinder that runs at a higher pressure of 8 megapascals and a revised tipper hoist stroke that allows for a maximum tip angle of 60 degrees (up five degrees on the current model) will also help to boost vehicle productivity, Fuso Truck and Bus director Justin Whitford says.

All Canter tipper models can be specified with 4.5 tonne GVM certification, which allows for them to be driven on a car licence while maintaining a useable payload thanks to the Canter’s low tare weight.

Both the Wide Cab Canter Tipper and its narrow-body City Cab sibling are the only Japanese tippers in their class with a Limited Slip Differential as standard, Fuso says. Also aiding traction are chunky rear tyres designed for slippery job sites.

They are part of Fuso’s recently expanded Built Ready range, which includes eight different models that can be purchased with bodies already fitted, saving customers from potentially long wait times.

Vehicles operated in severe applications, such as off-road, underground mining, crop spraying, or on the beach are covered under the Fuso manufacturer warranty for 12 months, or 50,000km or 1000 hours (whichever occurs first).