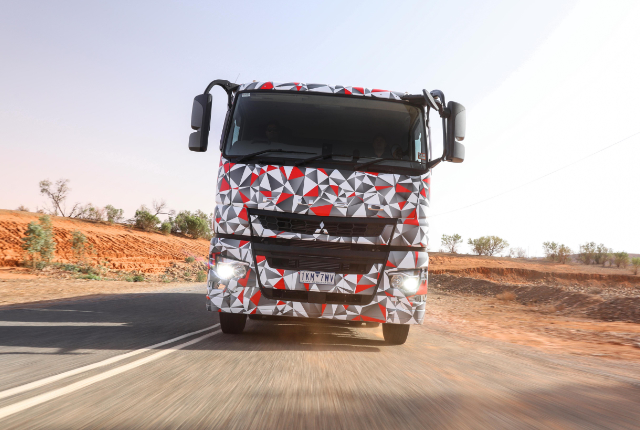 The new truck range has been developed using the project name “Black Panther”, but its official name will be announced on the stand in Brisbane.

Fuso has been running a targeted test and development program on Australian roads for the exciting new model that brings advanced safety and performance as well as new levels of comfort and refinement to the Japanese heavy truck market.

The new generation heavy duty truck will be available with built-in safety features such as active emergency brake and adaptive cruise control, while retaining the current model’s unique passenger side transom window that aides visibility in traffic.

It uses a new 11-litre six-cylinder Daimler-sourced Fuso engine using the latest technology, which is paired with a 12-speed Automated Manual Transmission. More details will be revealed in Brisbane, but the new generation truck will be available with a range of power outputs and as a prime mover or rigid.

“We have listened to our Australian customers and we have delivered the heavy duty truck they have been waiting for,” Mr Whitford says.

“Anyone who has driven one of our test trucks has come out raving about the refinement, the comfort and performance as well as the world-class safety features. It is a cutting edge truck that will save our customers money and we know they are going to love it.”

He says Fuso is in the enviable position of being able to benefit from the Daimler Trucks world of leading engineering technology.

‘Fuso has been able to leverage the global engineering strength of Daimler to deliver the best safety technology, the best performance, economy and comfort to our Australian customers,” he says.

The Fuso truck to be shown in Brisbane features an all-new interior with a modern and stylish design that allows the driver to reach the necessary controls. Many of the most popular controls can be adjusted from the multi-function steering wheel, allowing the driver to keep their hands on the wheel.

Fuso will also display models from its existing model line-up including the medium duty Fighter and small Canter truck.