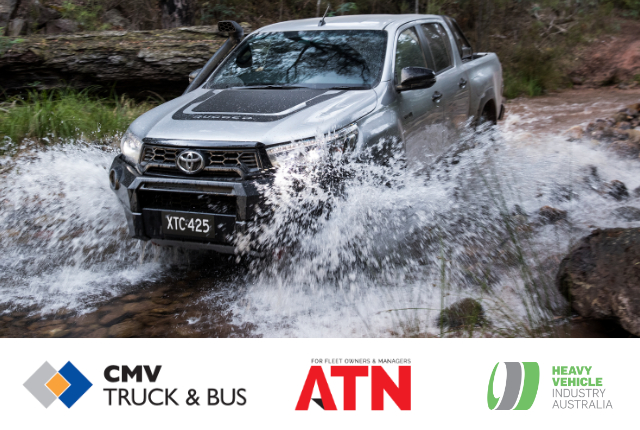 The 2019 Brisbane Truck Show Toyota Rugged X Giveaway promotion was drawn at the conclusion of the show on Sunday. Now that the winner has been contacted we can share their identity.

What a great feeling to be able to work together to deliver such a fabulous prize – thanks to our promotion partners CMV Truck & Bus and Bauer Trader Media.

John Xuereb, a tipper driver from Mangrove Mountain in New South Wales, was one of the first through the door on the second morning of the show.

John’s been a regular visitor to the show for years. He bought his ticket at the door and registered his details to become eligible.

Our team gathered around the phone to call him. We were stoked when he picked up first time.

Teagan from our events team opened with “John, were you at the Brisbane Truck Show on Friday?”

“You’ve left something behind,” Teagan teased.

Meanwhile we made a similar call to Noel Turner from Heavy Automatics on Adelaide.

Thanks to our travel partner Ozaccom+, Noel has won himself a $2,500 voucher for travel and accommodation at the destination of his choice. Noel scanned in our passport competition when he was here on Thursday.

Without going through all the prizes – Michael Cotton from Radiator Direct in Melbourne has won himself some great cooler bags from Engel.

A big thanks to our other passport prize partners – NXT Journey Truckie Gear travel bags & BlueParrott noise cancelling headsets, and sponsor of the new mobile visitor app this year.

Congratulations to all our prize winners over the last couple of months. And to all of you – thanks for participating and sharing the stories of the 2019 Brisbane Truck Show.