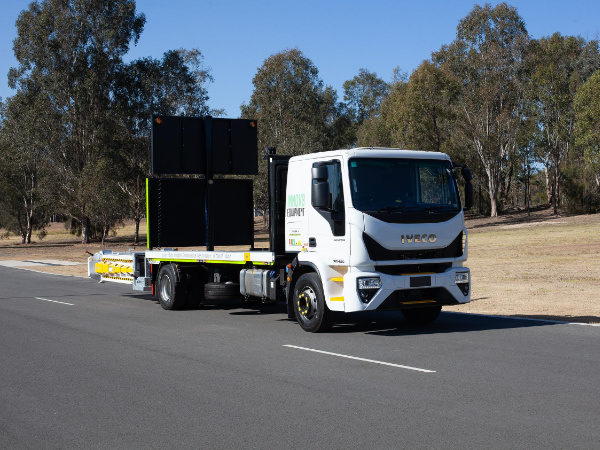 As a leading Australian supplier of traffic management equipment and related products, INNOV8 Equipment prides itself on being at the cutting edge of technology with the products it brings to market.

Just as important as striving to develop the best attenuators possible, having a quality truck platform on which to engineer the equipment is also vital, and the company now exclusively uses IVECO Daily and Eurocargo cab chassis models for this reason.

The truck-mounted attenuators are use in traffic management and road construction applications, to provide a rear safety barrier between traffic and workers.

In the event that the truck is hit from behind, the road workers in front of the truck stay safe, while the driver of the car is also less likely to sustain serious injury.

INNOV8’s Light Truck Mounted Attenuator (LTMA) as fitted to the Daily cab chassis is fully tested to TL-2 standard (able to handle impacts of up to 70 kilometres per hour) in accordance with National Cooperative Highway Research Program (NCHRP) requirements.

The larger ‘Blade’ Truck Mounted Attenuator as fitted to the Eurocargo, is tested to TL-3 standards and is capable of absorbing a crash from even a heavy truck travelling at 100 kilometres per hour.

With its extra length and unique construction, the Blade attenuator is one the best performing models of its kind according to industry testing, and has recently been recommended for acceptance by industry regulator, the Austroads Safety Barrier Assessment Panel.

INNOV8 Managing Director, Nigel McKinley, said the company had been using IVECO products exclusively now for over 12 months, and was very pleased with the partnership.

“Our company is driven by safety, innovation and compliance – it’s the prime focus of how we develop, engineer and manufacturer all of our products,” he said.

“In IVECO we’ve found a partner with similar values and goals. Our company is now solely using the Daily and Eurocargo for our LTMA/cone and bollard trucks and Blade products after changing from a Japanese manufacturer, and we’re extremely happy with the result,” Nigel said.

“From a customer perspective we’ve also received great feedback – every customer has been so impressed with the usability of the IVECO models. They comment favourably on the power and driveability of the Daily compared to other truck brands they’ve owned and also say that the Eurocargo is the most comfortable truck they’ve ever driven.”

Nigel said that given the application the trucks work in, there were a number of key areas in which INNOV8 expected its cab chassis suppliers to excel, namely with regards to safety, environmental performance and ease of use.

“All vehicles must be automatic and have a full suite of safety equipment,” he said.

“The Euro 6 Eurocargo sets new safety standards in the medium duty segment and also provides us with a truck that meets the most stringent emission requirements – this is in keeping with INNOV8’s environmental focus.”

Nigel said he was extremely satisfied with the service and support provided by IVECO in assisting INNOV8 to integrate its bodies.

“IVECO’s engineering support has been first-class and fitting the attenuators to the cab chassis is a streamlined process,” he said.

“I’m also really pleased to say that the IVECO afterhours service and Dealer support has been fantastic – they’ve stepped up to the mark whenever required.”

Only six days into its working life, one of the new Eurocargos on highway maintenance duties in Melbourne, was impacted by a motorist estimated to be travelling at between 90 and 100 kilometres an hour.

Testament to the quality of engineering in the Blade TMA, the driver of the car was uninjured, while all workers were also kept safe despite the speed of the collision.

The Eurocargo also escaped unscathed but underwent a precautionary chassis laser alignment test before being fitted with a replacement Blade and returned to service.