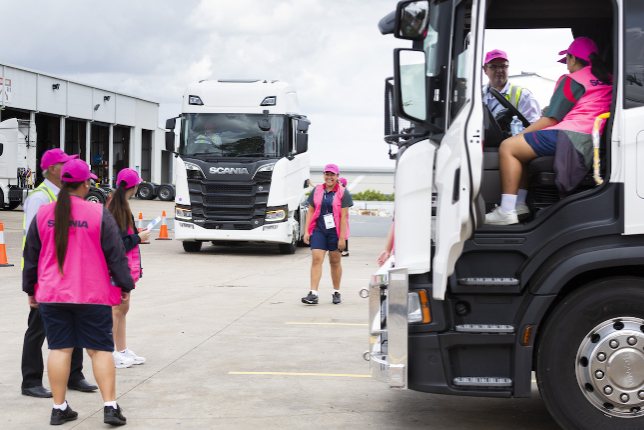 In a male dominated industry, International Women’s Day is a chance to say thank you to our hard working female industry personnel.  It is also an opportunity to try and inspire the future female leaders of our industry.

To that end, HVIA CEO Todd Hacking was delighted to be invited by Scania to a Women in the Workshop event aimed at young leaders from local Glenala State High School.

The 37 year 10, 11 and 12 students spent a day learning about the heavy vehicle industry, whether it was going for a ride in a Scania Truck and learning more about a driving career or finding and fixing a technical fault like a technician, the students were able to get hands on and experience a day in the life of a Scania employee.

Inside, students heard from 5 inspirational Scania female employees, at all different levels within the company to highlight the breadth of the industry – from apprentice technician and apprentice spare parts Interpreter, to human resources and everything in between.

They were encouraged to view the industry as a career and also heard the State Government’s training arm about the future of manufacturing and advanced manufacturing in Queensland.

The driving force behind the day is Regional Executive Manager Richard Singer, who has been supporting Glenala, in its new quest to become a Gateway Hub school for vehicle manufacturing.

“It’s taken many months of planning and I’m just delighted how the day turned out.  This was a pilot initiative but after seeing its success, it would be hard not to continue this in the future, Mr Singer said”

“I owe this industry a lot, from the shop floor to my current position, to the positions I have had around the world.  I’m passionate about getting more young people and young women in particular into the industry, he said”.

“It was a fabulous day, the smiles, the interaction, the fact that this global company is on the doorstep for these local students, opened their eyes to the possibilities and the opportunity of the heavy vehicle industry, Mr Hacking said.

“To all of the staff and students of Glenala, to Richard and his team at Scania Richlands, to MJ Mahon for donating a couple of vehicles, to the guest speakers – congratulations and well done on a fantastic day, Mr Hacking concluded.