Home / Articles / Isuzu’s Tradepack – or is it a retirement pack? 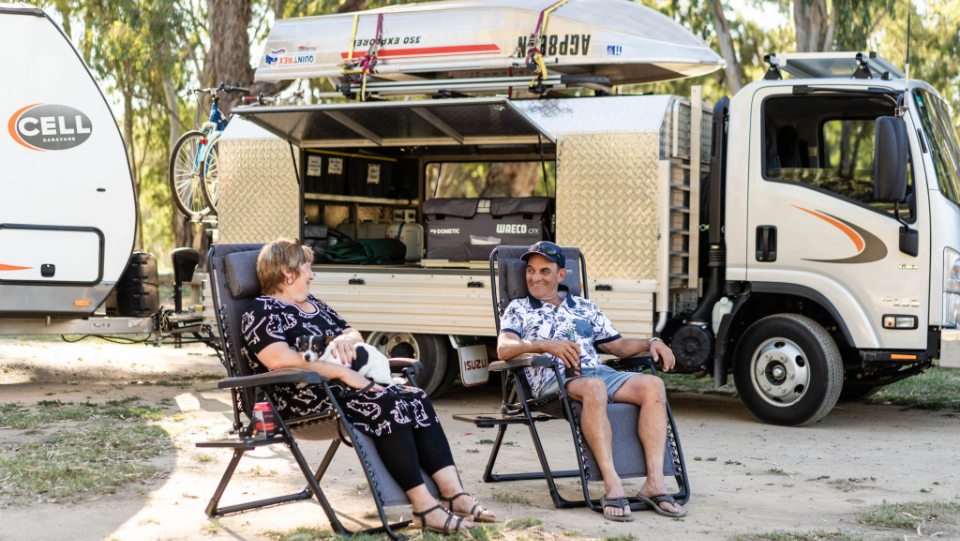 Grahame Butler has been a truckie for most of his life, and he can’t think of a better way to spend his golden years than to tour Australia with his wife, Robyn, and their Isuzu truck and caravan in tow.

Married for over 35 years, Grahame and Robyn are camping and adventure enthusiasts with big plans.

“Our plan is to sell the business, sell our house, hop in the caravan, go north, and have a look around Australia for about three years.

“We’ll find out where we want to have our base, whether it be in Victoria, Queensland, or up in Broome,” Grahame said.

“We’ll purchase a little house somewhere on the prairie and live happily ever after.”

Having purchased a Ready-to-Work Isuzu NPR 45-155 Tradepack from Wagga Motors Isuzu in 2018, they are one step closer to their dream.

“Originally, I had our caravan hooked onto a brand-new ute, but it didn’t turn out to be a great idea,” Grahame explained.

“Our Cell Caravan is 26-foot-long, and it weighs three tonnes even when its empty, so I was up to the maximum loading weight already.

“I could only carry an extra 500 kilograms on top of that with the ute … there was no space to put any of the goodies—barbecue bits and pieces, gas bottles, the boats’ outboard motor, and all the other odds and ends.”

“With this Isuzu truck, I have the space and payload to build a canopy on the back, carry all our camping gear and hook on the caravan with no concerns about being over the loading limit.”

The couple love their Isuzu Tradepack so much they even re-lettered the nomenclature to spell their intention—renaming it their Isuzu “Retirementpack”.

When asked about why they chose an Isuzu truck ahead of other worthy recreational brands on the market, Grahame replied succinctly, “I’ve had three Isuzu vehicles and I’m always impressed with their reliability.

“Isuzu has been around forever, and I know they produce quality vehicles.”

And Grahame is no stranger to trucks.

He first began his journey as a part-time truck driver with F.A. Delaney Quarries back in 1988. From those humble beginnings he progressed to become a full-time owner-operator, contracting a good portion of work with Coates Hire in Wagga Wagga.

These days, Grahame spends most of his time transporting farm machinery such as headers, rollers, excavators, and boomers in heavy-duty prime movers. But that doesn’t stop him appreciating trucks from the lighter end of the spectrum—including his preferred brand.

“When I was thinking of buying a little truck to pull my caravan, I knew my choice was going to be an Isuzu, I didn’t even price out the other truck brands,” said Grahame.

“If you want a good truck with reliability, just go and buy an Isuzu. The choice for me was as simple as that.”

And making Grahame’s decision that little bit easier were the sales staff at Wagga Motors Isuzu, who were happy to help.

At the dealership, Grahame asked the sales staff if he could hook his caravan onto the back of the NPR Tradepack and take it for a test drive.

“And the dealer replied back, ‘That’s not a problem.’”

And it was that kind of customer service approach that clinched the deal for Grahame. After the test drive, he went straight back to the dealership, signed the paperwork, and bought it then and there.

“I’m more than happy with the deal I got on the Tradepack, that’s for sure. The experience with the dealer was excellent,” he said.

Since its purchase in 2018, the Tradepack has clocked over 9,000 kilometres, with Grahame and Robyn taking turns driving the truck through country roads on weekend getaways.

With a GVM rating sitting at 4,500 kg, driveability and the option for both Grahame and Robyn to take turns at the wheel was the other reason why they chose the light-duty NPR Tradepack.

“You don’t need to have a rigid or combination truck licence to drive it, which is great as Robyn has a regular car licence.

“We also upgraded to the Premium Tradepack, which has automated manual transmission (AMT), cruise control, Sat Nav, airbags and all the bells and whistles.”

“It’s easy to drive, and the cabin is also comfortable,” continued Grahame.

“Generally speaking, trucks can be a bit rough on the road, especially when they’re empty, but with the canopy and our gear packed in the back of the truck, along with the caravan hooked on, the ride isn’t bad at all… it’s really good.”

Grahame also has only positive things to say about his aftersales experience with Isuzu Care and the service team at Wagga Motors.

“The Isuzu Care team have been great, haven’t had any issues at all.

“I bought the truck new, and the only people that will ever put a spanner on it is the service team at an Isuzu dealership—there’ll be nobody else,” noted Grahame.

With Robyn on board for their next chapter, Grahame has certainly got their retirement route scouted and the duo are ready to hit the road.

“I’ll be pushing 65 next year, so trust me when I say I’ve been around the traps a bit.

“I’ve driven a lot of trucks. It wasn’t a very hard decision to buy an Isuzu, and now that I have, I am more than happy with it,” he concluded.