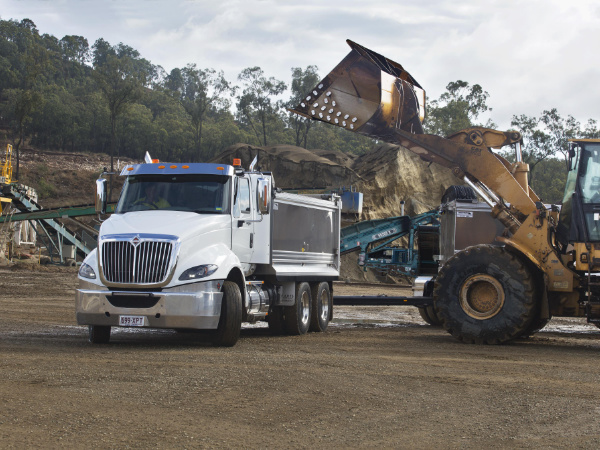 Having already operated an INTERNATIONAL 7600 for around 10 years, when JR Plant Hire owner James Lutter was looking to add a tipper and dog to the fleet, he didn’t look beyond the INTERNATIONAL brand.

“The INTER 7600 is set-up as a tipper and tows a three axle tag trailer with our combination excavators on the back – it’s still going strong after a decade of hard work and doing everything that’s being asked of it,” James said.

“I figured that the ProStar would have the same DNA, so I made some enquiries and found one ready to go at Brisbane IVECO / INTERNATIONAL, complete with Shephard aluminium tipper body, which was our preference.

“Since then we’ve also had a matching Shephard tri-axle PBS dog trailer built for it, providing us with a total payload of up to 32 tonnes. We normally run the truck in a tipper and dog spec but occasionally it will also pull the tag trailer.”

James’ ProStar tipper features a Cummins X15 SCR engine producing 550 hp and over 2500 Nm of torque and is matched to an Eaton 18-speed manual transmission – the Cummins / Eaton combination has a great track record, according to James.

“Cummins and Eaton have a strong reputation for durability and I also know that the ProStar went through a lot of local testing and development before being launched in Australia,” James said.

“Overall the dimensions of the truck, the integrity of the driveline and the output of the engine make it an excellent choice for tipper and dog work.”

Although James was responsible for making the purchase decision on the ProStar, he admits that most of his time is spent at the controls of the excavation equipment rather than behind the wheel of the truck.

The driving duties in the new ProStar are largely left to workmate, Mark, who has been driving professionally for most of his working life.

“Mark has been driving trucks for many years and he comments very favourably on the ProStar – it’s much nicer than most of the previous trucks he’s used,” James said.

“Having a comfortable truck to drive with the right specifications makes our job a lot easier and we’re finding the ProStar to be excellent for tipper and dog work,”

At present James, Mark and the ProStar are being kept busy carting gravel out of Zanows’ Quarries in Frazerview, to maintain roads around the greater Kalbar area, south of Ipswich.