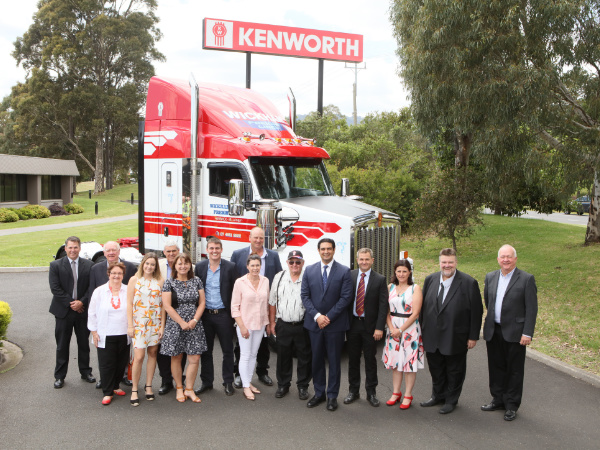 Australia’s number one heavy-duty truck manufacturer, Kenworth, has delivered its 60,000th Australian-designed and built truck at its Bayswater plant in Melbourne.

Andrew Hadjikakou, Managing Director of PACCAR Australia, handed the keys of the T610SAR prime mover to long-standing Kenworth customer Peter Wickham, co-founder of Wickham Freight Lines – one of Australia’s largest privately-owned transport companies, at an event at Kenworth’s head office and factory in the outer eastern suburbs of Melbourne.

Andrew said Kenworth’s achievement in manufacturing 60,000 trucks was a major milestone, not only for the company and its dealer group, but for its suppliers, the vast majority of whom are local.

“Celebrating key production milestones is a Kenworth tradition, one that began in April 1974 when we handed over the keys to truck number 1,000. Since then we’ve celebrated each major milestone, leading to today, when we hand over the keys to the 60,000th truck that’s rolled off the Kenworth production line since we began designing and manufacturing uniquely Australian trucks in 1971,” Mr Hadjikakou said.

Kenworth trucks are the mainstay of Australian transport businesses of all sizes, from large fleets to single owner-operators. Its trucks are also exported to New Zealand and Papua New Guinea.

“The heavy-duty truck market in Australia is one of the most competitive in the world,” Andrew stated. “In an industry with no tariff protection, no government financial assistance and often volatile exchange rate movements, Kenworth successfully maintains its status as the market leader against imported brands from the US, Europe and Asia. We continue to successfully deliver high value-added manufacturing – that is, world-class trucks, which provide distinct business advantages,” he said.

Andrew said Australia had a diverse range of operating environments unlike anywhere else in the world. Trucks must deal with extreme heat in remote, dusty mines and across deserts. Others must haul loads that are two or three times heavier than overseas, and on rough and unmade roads. Often trucks are required to perform an inordinate amount of hours, some as much as 24 hours a day.

“It’s critical this country has a local manufacturer that understands the challenges facing transport businesses. Kenworth is the only local truck manufacturer offering full design capability, technical expertise and resources to application-engineer trucks for the most extreme on and off-road operations,” Andrew explained.

“Our trucks are designed to satisfy these unique needs. They feature higher cooling capacities to handle heavier weights and hotter conditions, more robust construction to manage the roughest roads, and embody a design philosophy that means cost-effective maintenance and reliability,” he added.

Mr Hadjikakou said Kenworth’s more than 45 years of local manufacturing have a significant ripple effect that has benefited many Australian industries and Australians.

The company currently employs more than 1,000 staff in Melbourne, the majority of whom are directly or indirectly involved in the manufacturing operations. It also supports the industry’s best nationwide network of PACCAR dealers who employ about 3,000 people throughout Australia. In addition, the company supports a variety of local suppliers who provide the majority of the parts and materials which make a Kenworth.

As part of its manufacturing commitment, Kenworth has made a substantial investment in design engineering. This enables it to purpose-build trucks with short lead times – a feat imported trucks cannot match.

“Local design and manufacturing remains the driving force behind our business, and we’re in it for the long haul. We are continually reinvesting in expanding our operations, continually refining our techniques and introducing new technologies. Most importantly, we listen to our customers and we meet their needs,” Andrew added

“Wickham Freight Lines is one of our long term customers,” Mr Hadjikakou said.

“They are knowledgeable and passionate about the road transport industry and forthright with their thoughts and opinions, which has contributed to the continuous improvement of our trucks for close to four decades. It’s been a win-win for both parties, and it’s the epitome of how we conduct business with all of our customers.”

“It’s gratifying to receive this milestone vehicle,” Darren Eather, Chief Executive of Wickham Freight Lines said at the official hand-over. “We have been working with PACCAR for many years; it’s being part of a team. They satisfy all of our trucking needs – not just sales, but also finance, servicing and parts. PACCAR and Brown and Hurley take the stress out of maintaining a large and diverse fleet, enabling us to focus on improving our service to customers,” Mr Eather said.

Wickhams is one of the largest privately-owned transport companies in Australia. Established in 1992 it specialises in transporting fresh, chilled and frozen meat and produce, as well as consumer products and dry goods, servicing retail supply chains and other logistics providers. With its unique head office in the shape of a Kenworth K108 cabover in Warwick, Queensland, and terminals in Sydney and Melbourne, the company now operates a Kenworth fleet of 160 prime movers with its distinctive red and white livery.

Wickhams’s T610SAR, will go to work transporting meat and produce in refrigerated trailers travelling to approximately 250,000 kilometres a year along the eastern seaboard.

Kenworth’s T610SAR is the brand’s latest release. In just one year since its launch on December 3, 2016, it has established itself as a versatile and hard yards specialist, which can manage a variety of applications; including interstate line haul up to 19m B-double and tipper and dog applications.

The T610SAR features a significantly wider cabin, which is centred around the needs of the driver. With increased walkthrough space between seats, greater room head-to-toe for the driver, more standing room in the sleeper cabs, the interior is far easier to move around in. With advanced heating and cooling that’s more powerful yet efficient, the cabin maintains optimum temperature at all times. The expansive windscreen offers a panoramic view of the road, the cabin’s superior ergonomics means controls are positioned intuitively and dashboard instrumentation is visible at a glance. With a complete range of active and passive safety features, including advanced collision avoidance technology, the T610 readily adapts to operating conditions to enhance fuel economy with no impact on productivity.

Mr Eather says the T610, like all Kenworth models, offers significant advantages compared with other American-style and European brands he has tried over the years.

“We have bought almost 250 Kenworths, and we continue to buy them every year because it’s good for business. With Just In Time (JIT) deliveries now the norm, our customers need our trucks there on time every time. Kenworths are designed and manufactured in Australia for Australia’s harsh environments and applications. And Kenworth builds trucks to our exact specifications and requirements – and that makes all the difference,” he said.

“Kenworth trucks are more reliable, durable and cost effective to run. They can handle hard work, long hours and many years of service. It’s no wonder our drivers love them. The trucks are also safe and comfortable to operate, and they perform well under any conditions,” he explained.

Mr Eather says Kenworth’s nationwide dealer network, in particular Brown and Hurley, also plays an integral role in its transport efficiency. “Our trucks cover a lot of territory, so it’s comforting to know that if they ever have a problem, there’s a Kenworth dealer nearby,” he added.

Kenworth trucks, with GCM from 39 to 260 tonnes, cover the full spectrum of heavy and extreme-duty applications. This includes multiple-trailer regional and interstate freight, tipper and dog construction work as well as off-highway operations for the logging and mining industries.

Kenworth trucks are designed and manufactured in Australia to meet the world’s toughest applications. Kenworth, a division of PACCAR Australia, is market leader in heavy duty trucks in Australia. Its trucks are also exported to Papua New Guinea and New Zealand. PACCAR Inc, a Six Sigma company, is a global technology leader in the design, manufacture and customer support of high-quality light, medium, and heavy-duty trucks under the Peterbilt and DAF brands. PACCAR also designs and manufactures advanced diesel engines, provides financial services and truck rental and leasing services and distributes truck parts related to its principal business.