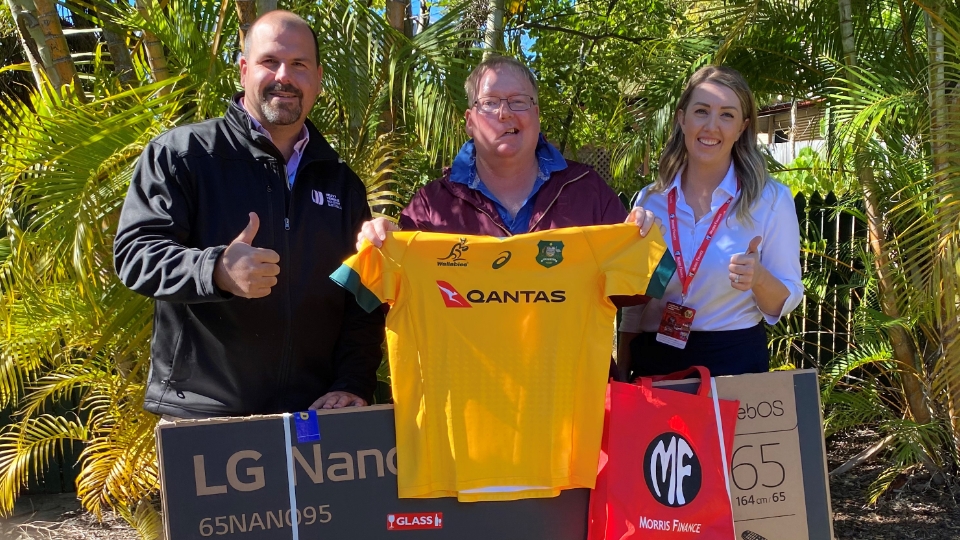 The 2021 Brisbane Truck Show (BTS21) commenced with a stirring speech by Trevor Hendy, who had several attendees reaching for their napkins, and after four hectic days of trade, closed in similar fashion with the awarding of the Morris Finance Ultimate VIP Experience Package to Joe Potter of Zillmere, Queensland.

Joe attended the show on Saturday as part of a family outing with his two brothers, one of whom is a truck driver, the other a diesel fitter.

The family outing coincided with the third anniversary of Joe’s operations to remove an SR Trigeminal Malignant Schwannoma Tumour in his brain, which involved twelve hours of brain surgery and an eight week recovery in hospital.

Joe’s initial response was priceless: “Well, how about that; you wouldn’t be dead for quids.”

On Monday, as the $45,000 prize package was delivered, Joe followed up with: “Wow, I don’t even win raffles at the rugby.

Joe, even managed to laugh at the supposed irony, saying “Of the three boys in my family, one is a Diesel Fitter and, the other one drives a truck for a living, but the son with a Degree in Political Science and International Relations wins the prize at a truck show”.

Nathan Murray, Managing Director of Morris Finance was delighted to see the Ultimate VIP Experience Package go to someone so deserving.

“It was our first time sponsoring the Brisbane Truck Show, but it was a truly wonderful event,” Nathan said.

“We were pleased to be able to offer up this amazing prize and sponsor the complimentary shuttle bus to the Civil Construction Field Day.

“The Brisbane Truck Show is indeed a premier business event, however we also enjoyed providing some lighter entertainment with our racing simulator proving a hit right throughout the event.”

Joe plans to share the prizes with his family and was clearly overwhelmed this morning.

The Prize included 12 items assembled by Morris Finance and their partners and was valued at just over $45,000.  Included in the prize was the following: