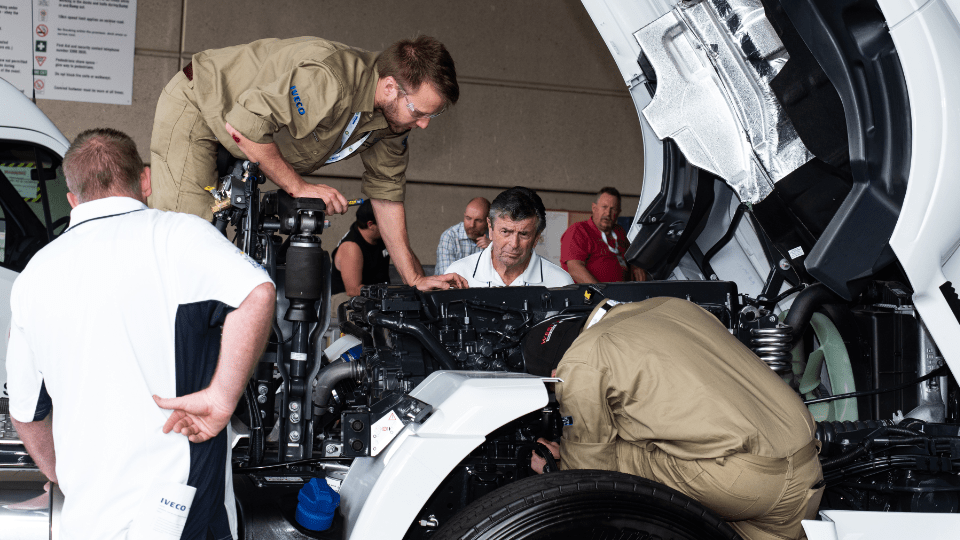 Three teams are set to compete at the HVIA National Apprentice Challenge, to be staged live at the 2021 Brisbane Truck Show.

The competition pits the best-of-the-best from all over the country, against each other and against the clock.

The prizes are hugely attractive for a young bloke/lady on the tools, what with a fully hosted trip to the V8 Supercars up for grabs; the full corporate treatment and pit lane tours and a whole lot more.

Apprentices from around the country sat a rigorous two-hour online test, set by TAFE Queensland SkillsTech, with the two highest results from each of the regions selected to compete in the intense challenge.

Heavy Vehicle Industry Australia Chief Executive Todd Hacking says the number of nominations for the 2021 National Apprentice Challenge is testimony to the emerging talent coming into the heavy vehicle industry.

“The response has again been exceptional, with nominations received from 2nd, 3rd and 4th year apprentices, Australia-wide,” Mr Hacking said. “We commend every apprentice who took part in the gruelling exam.

“These young people are at the beginning of a journey that will open doors to hugely rewarding career paths with Australian and international companies involved in the manufacture, distribution and support of trucks, trailers and their components.

“These talented young people have competed for the honour of representing their region; congratulations to each of the apprentices from each of our three regions who have been selected to come to the South Bank Truck Festival where we will stage the live competition alongside the Brisbane Truck Show.”

The successful apprentices will enjoy an all-expenses-paid trip to the 2021 Brisbane Truck Show for the four days.

Each regional team works on one of two identical Isuzu FX-series prime movers to identify and rectify a series of programmed faults as the clock ticks.

The winning team is the first successfully to identify and repair all the faults, or the team that rectifies the most faults within the allowed time frame.

Now there is the added pressure of performing under the spotlight. The apprentice challenge is moving from the loading bays at Brisbane Convention and Exhibition Centre into South Bank Piazza.

The set-up at BCEC was great, but this is like going from a kick around at the park to the MCG in one fell swoop…. Or in this year’s case – the Gabba.

Heats are held on Thursday and Friday in front of over one thousand school students who are brought to the show to get a taste for the heavy vehicle industry as a career option.

On the weekend it is the community’s turn. Entry to watch the event is free.

For visitors the show the competition is quite a dynamic spectacle, with commentary explaining the apprentices’ moves and strategy, as their approach to addressing the challenge unfolds.

Things can get tense as the teams watch their available time evaporate.

see all the details on the south bank truck festival website

All finalists will receive tool prizes courtesy of Warby Tools.

The top two teams from the heats will go head-to-head in the final on day four of the Truck Show.

“I started in this great industry as an apprentice when I was fifteen, just like our nominees,” he said. “It has given me opportunities to work in many different sectors of the industry, both here in Australia and overseas, from the shop floor and into different levels of management.”

“It is also important to acknowledge the companies that invest in these young people and the industry’s future.” He added. “Congratulations to all of them for nominating their apprentices into this year’s Challenge.”