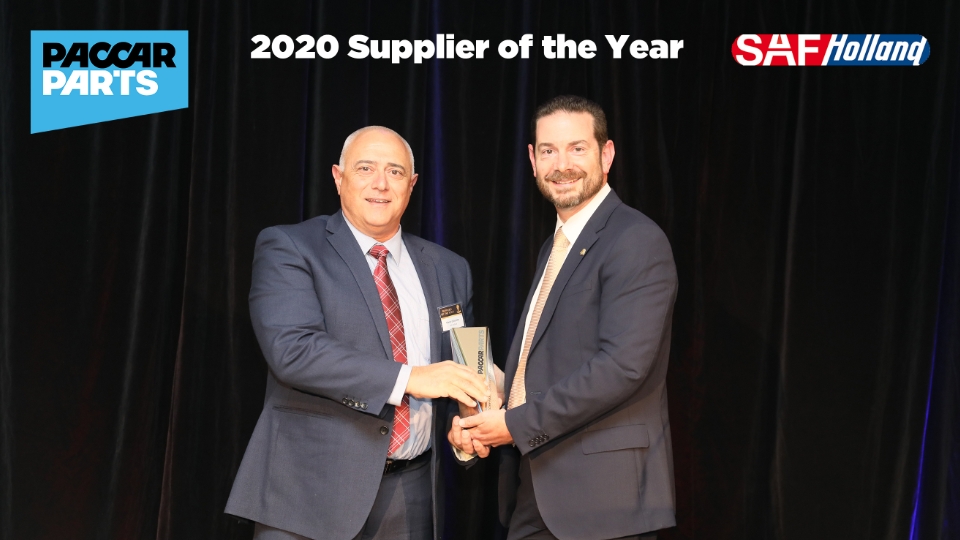 The award was presented at the 2020 PACCAR Supplier of the Year Awards ceremony held at St Kilda in Melbourne on 22 April 2021. Each year, PACCAR Australia recognises its top performing major suppliers in its Supplier Performance Management (SPM) program.

Through the SPM program, suppliers and PACCAR Australia personnel collaborate to identify performance enhancements and to develop product innovations. This culminates with an annual Supplier of the Year Awards evening where the best performing suppliers in various categories are recognised.

Damian Smethurst, General Manager of PACCAR Parts presented the Supplier of the Year trophy to Mario Colosimo, Managing Director of SAF Holland, congratulating the company and crediting them for their benchmark performance.

Colin Brown, PACCAR Parts Materials Manager praised their performance by saying that “The environment in which we operated last year allowed the truly great organisations to clearly stand out above the rest and SAF HOLLAND was one of those organisations. With them, we were able to operate largely under a business as usual environment, which is a reflection on the team at SAF HOLLAND and how they manage their business. They have managed the crisis extremely well and their Operations teams should be commended on their performance throughout last year. Nothing short of amazing.”

Mario Colosimo, Managing Director of SAF Holland graciously received the award saying: “SAF Holland Australia are proud to have won the award. All SAF Holland staff have contributed in some way to the service level that has been recognised by PACCAR. Special thanks go to both Phil Crosbie and Brett Birkett for their efforts towards improving our performance with PACCAR Parts, and indeed with our whole aftermarket parts business”.

He further commented: “In these busy and trying times, when on occasion we may feel that our best is not good enough, it is reassuring to know that our efforts are appreciated by our customers. It is also important for us to recognise the importance of PACCAR Parts to our business, their professionalism and entrepreneurial spirit gives us something to aspire to”.