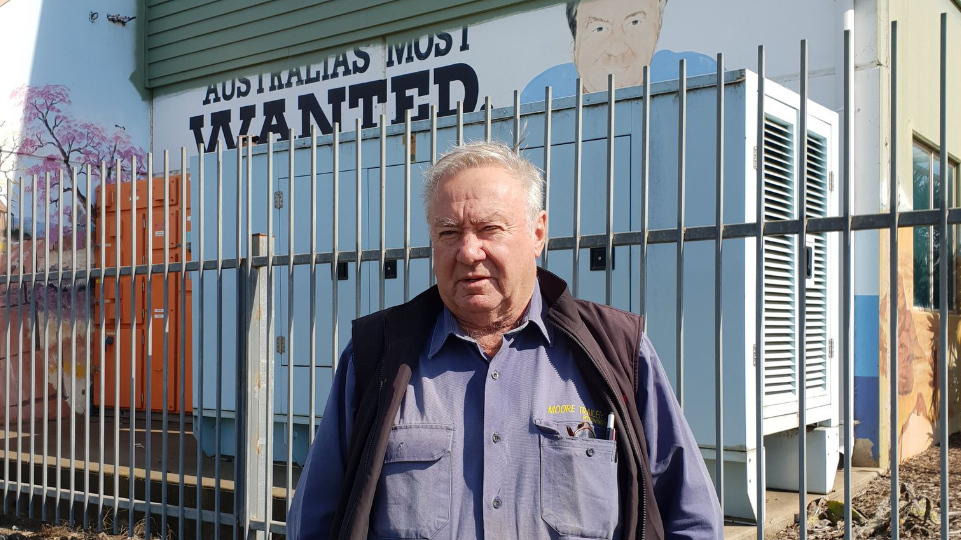 And over that time I’ve observed a big shed with a one hundred metre mural upon it celebrating local people and places.

Included is an image of a big bushie sort of bloke, like me, with the words “Australia’s Most Wanted” perched above his head.

At first I thought he may have been a bank robber but a little research revealed he was in fact Lionel Moore and this was his business, in the middle of nowhere, Moore Trailers.

In a country long forgotten as a manufacturer, where Ford and Holden plants lie idle in Geelong and Elizabeth, here at Murlaggan Road, Yarranlea is one serious regional manufacturer.

Curiosity got the better of me so I took a deep breath, picked up the ‘phone and asked for Lionel.

I had nothing to offer, I wasn’t buying or selling, but whatever I said was enough to get me into his office.

A couple of days later I was at Yarranlea amidst a sprawling collection of very big sheds.

I could see Lionel was a very busy man so I fired my questions at him quite quickly and tried to keep up with his answers as best I could. Lionel was born, bred and educated in Pittsworth.

At fifteen he left school and took on a boiler making apprenticeship with O’Phee Trailers where he remained for twenty-seven years, rising from apprentice to National Sales Manager.

In 1988 he decided to go into the trailer manufacturing business on his own and he rented a shed in Pittsworth.

Later a Yarranlea farmer offered him a small parcel of land, too small to farm, which had been left after the bypass went through and which was accessible by road trains.

A “family” of sheds has emerged from that humble beginning with almost yearly constructions and extensions and one monster building now nearing completion.

Amazingly Moore Trailers manufactures five hundred trailers a year, they sell for between $40,000 and $200,000 and are distributed throughout Australia as well as in South Africa, Papua New Guinea, New Zealand and Fiji.

They use Australian steel and other components from New Zealand, China, Japan, Taiwan, the United States and Europe.

Eighty-five staff are employed including his two sons, sixteen apprentices and three draftsmen and there’s room for thirty-five more staff.

I asked him how long he would stay in the business and he replied, “Until I die.”

I expected nothing less from this proud, independent manufacturer.

It would be nice to think that many more manufacturing businesses like this could spring up in regional communities across the nation.