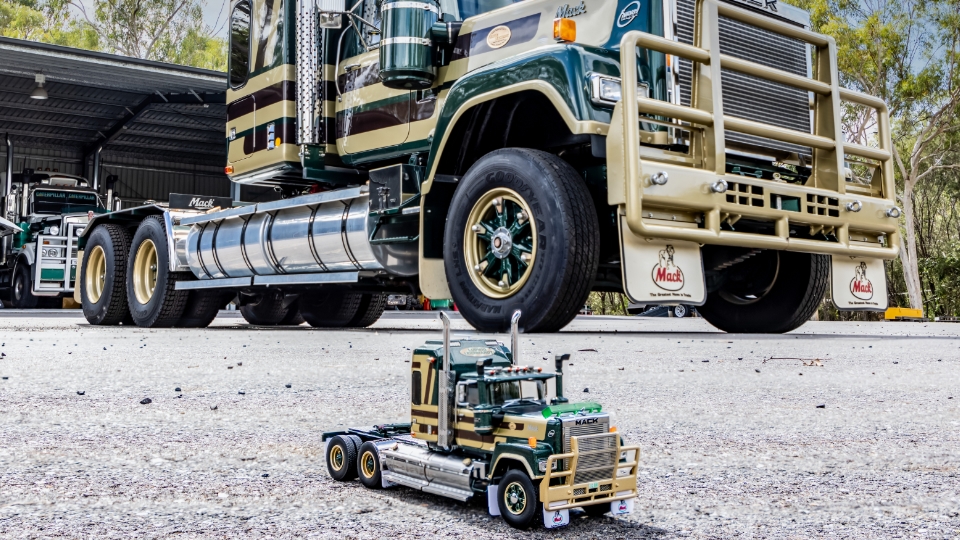 Well, we finally have an answer to the question, “Who Let The dogs out” It was Drake Collectibles and they let them out on Saturday the May 1st at their Wacol Facility.

Drake Collectibles is a division of the Drake Group that have been producing hi-grade diecast replicas of transport equipment for over a decade. What started out as a PR exercise for Drake Trailers back in 2007, has now grown into a worldwide diecast distribution network. Drake Collectibles are now recognised as one of the world’s leading hi-grade diecast model manufactures with a reputation for attention to detail.

However, these weren’t just any old dogs, these were an historical piece of Australian Transport history, the Series 11 Mack Bicentennial Superliner. 16 trucks specially released by Mack Trucks back in 1988 to celebrate just the previous 200 years of Australian History. Each truck was name after a famous Australian who helped shape this beautiful country that we live in.

Development of this project took around two years to collect all the data required to reproduce a museum grade miniature replica of these historical trucks.

The big announcement was on Saturday 1st May at The Drake Group facility in Wacol. It was well attended by over 100 avid diecast collectors and a few Mack enthusiasts who knew what was coming due to their assistance in developing the product.

There was a massive cheer from a surprised and excited group when the Mack replicas were announced which rapidly change to a look of astonishment, when 5 of the original 16 trucks emerged from the back yard where they had been secretly assembled earlier in the morning.

All the trucks lined up across the yard in a straight line, fitting in front of their creator, Mr Don Hoey the man who controlled the project back in 1988.

As an added bonus, when patrons entered the facility, they each received a ticket to a special draw. At the end of the event, 5 very lucky people received a lap around the block sitting in the passenger seat in a convoy of Mack Bicentennial Superliners.

Drake Collectibles will produce all 16 of these historical trucks in miniature. The first two truck models were released for sale to those who attended on Saturday with the remaining replicas released to the public on Tuesday morning4th May at 9.30am and sold out in a record time.