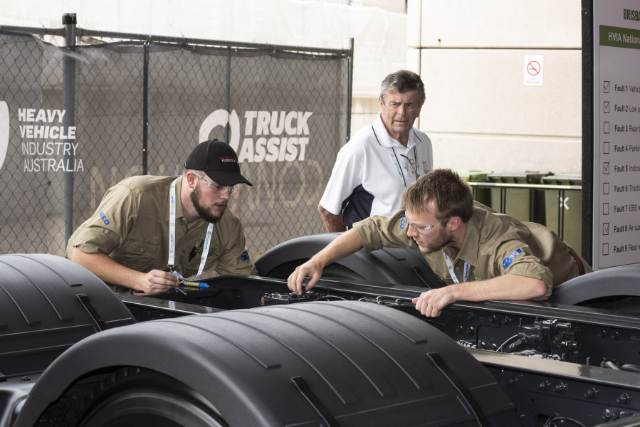 The competition has been running across the four days of the 2019 Brisbane Truck Show.

In the end the Southern Zone team of James Greig and Brett Holland finished on top with 13.5 points.

Runners-up Campbell Garson and Kieran Herlihy representing the Eastern Zone were only 1.5 points away.

“As expected it went down to the wire and we had to double check their work,” he said.

In the challenge, teams had to work against the clock to identify and rectify a series of generated faults on identical trucks provided by Iveco Trucks Australia.

“The Eastern Zone team forgot to mark a fault they repaired on the board. Unfortunately, this meant it couldn’t be recognised as a completed repair.”

Mr Musch congratulates all apprentices on a job well done.

“To thank each of the apprentices for their effort in the challenge, they will each receive a tool kit thanks to Warby Tools, and a Truckie Gear Bag thanks to NXT Journey.

“James and Brett will attend the Gold Coast 600 Supercars Championship event in October 2019 thanks to Apprentice Challenge’s major sponsors NTI and Truck Assist.

“They will also be lucky enough to meet drivers in the pit lane and will both take home a Red Bull Holden racing team merchandise pack thanks to Iveco Trucks.”

The teams impressed both event coordinators and crowds with their high level of skill and professionalism.

“It’s safe to say the apprentices who participated in the challenge will go on to have very rewarding and enjoyable careers,” he said.

“We can’t wait for the 2021 Brisbane Truck Show to host the next challenge, where will we see a new wave of young, capable, and eager apprentices to take part.”